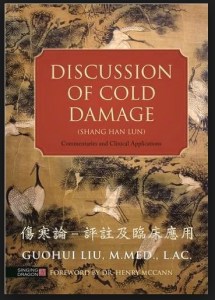 To summarize, the Shang Han Lun, written around 200 AD by Zhang Zhongjing,  is much studied text from around the year 200 AD although the original text is no longer intact. Scholars and practitioners of Chinese Medicine have analyzed it for its insights into Chinese medicine and herbs for centuries. For that reason, it is often referred to as a “Bible” of Chinese herbology or a “Talamud” for the millennia of commentaries attached to it. The text itself can be printed out in 40 or so pages of Chinese characters in to almost 400 numbered “clauses” or lines. Another book was “spun-off” from the original text: The Golden Cabinet. It is the meaning of each of these clauses and how they build into progressions of disease and treatment that has captivated practitioners and scholars for close to 2000 years. The Shang Han Lun was put into practice in Japan in what was called “Kampo”. In Kampo practice herbal formulas in Kampo did not need medical theory to be utilized. Therefore Kampo was incorporated into 20th and 21st Century the Japanese mainstream medical system. For that reason, Shang Han Lun and Golden Cabinet formulas are often studied and applied in clinical trials in Japan which are then published into the modern scientific and medical community.

Although Chinese language books on the same subject could easily fill a bookstore, English language books run to few dozen. Without a doubt, Liu’s book is the most comprehensive.

Each clause is broken into several sections: 1) The original text with pinyin 2) a synopsis of the line 3) a translation of that line 4) “Difficult or redoubtable points” 5) Commentary 6) Analysis of the formula (if in the clause) 7) Applications of the formula 8) Clinical experience of ancient and contemporary practitioners. Formulas, when they first appear in the text, are shown in that clause.
It is in these sections that extremely practical and clinical information lifts the book above an academic exercise. The “Difficult or redoubtable points” section is a discussion of the ancient and modern interpretations of the meaning of the clause. This section for Gui Zhi Jia Fu Zi Tang runs close to 4 pages and is by no means the most exhaustive. Dr. Liu provides his own informed views on others’ texts and thus masterfully ties the practical and scholarly commentaries together. He is generous in these quotes as one commentary may run for a page or more and he includes modern interpretations from modern scholars such as Mitchell, Young and Sheid/ Bensky. My only small issue with the book is that there is no pinyin index of the formulas (although at page 900 there is an easily scanned list).

The fear in a book of this size is that it will be only of academic interest. However, I have found myself looking at it for clinical situations and have found the most practical solutions for patients in this Shang Han Lun translation. For this reason, I greatly endorse this book for all who want to both learn and use the Shang Han Lun method. ISBN: 978-1-84819-254-6

As a “companion book” Dr 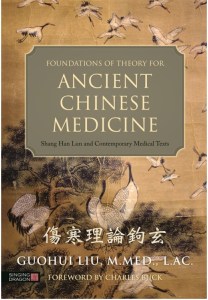 . Gui and Singing Dragon Press have released Foundations of Theory for Ancient Chinese Medicine – Shang Han Lun and Contemporary Medical Texts. This is an “introduction” to many of the stickier problems of theoretical Chinese Medical Theory such as the six conformations and zang-fu (organ) theory. One gets the feeling that these are notes that didn’t quite make it into the already large Shang Han Lun book. Considerably smaller (and unfortunately less well edited) it serves as a good place to start before tackling the larger book.

available in the USA at Redwing Books