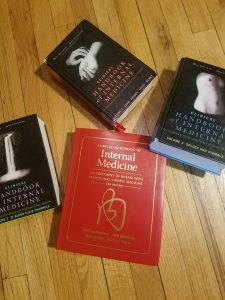 became a well-regarded addition to English language CM books. The first book covered diseases of the Lung, Kidney, Liver and Heart. Volumes 2 came out over a few years later and covered the other organs and in Volume 3 (2010) they cover Qi, Blood, Fluid and Channels addressing more perplexing, challenging and interesting “miscellaneous diseases”. The Handbook is based on Chinese texts and were embraced by many native Chinese teachers and practitioners. If you are like me your original books have seen a bit of wear and tear and Volume 1 especially may have yellowed. The new Eastland edition has taken all 3 volumes and put in one book. The new volume weighs in at over 1600 large format pages with a “soft” hard cover.

The format of the new editions is basically the same. The 89 chapters are organized by Diseases and within each disease are the possibilities based on the 8 parameters, Qi, Blood, Fluids etc or zang-fu differentiation.  (Unfortunately students, who are usually taught and tested by zang-fu order as a base, have a hard time wrapping their heads around. ) Most of these diseases are instantly recognized as Western problems while a few have the Chinese twist to them such as Fainting and Funny Turns, Sudden Turmoil  and Hua Huo Disease. The Diabetes Chapters, for example, has 10 + subsections including Nephropathy and Peripheral Neuropathy. The majority are common problems while many are common in the clinic but not often discussed including Tooth Abscess, Mouth Ulcers, Halitosis and Depression. There is a long chapter on thyroid disorder, a disease which many of us treat with our patients. Maclean has taught extensively on the Thyroid so his extensive and expert discussion in this chapter is especially welcomed.

This new edition has been substantially rewritten and has not simply put the 3 original volumes under one cover. Many of the chapters have been rewritten with the continued clinical experience of the writer. The strength of the Handbook(s) over other strict translations of other Chinese texts has been discussions of familiar clinical practices. The chapter on Rhinitis for example talks practically about the use of sinus rinses and Neti pots. New chapters on men’s issues is extensive and has a nice mix of grounded CM and practical understanding.

My only admittedly petty complaints are the Table of Contents and omission of one part of the Introduction. The Table of Contents has all the subheadings- I would have preferred to see a “double” Table of Contents with only Chapter Heading and then a second expanded Table. I would have like to keep the discussion of the Diagnostic Method which I found very useful in the Volume 1 Introduction. Also missed is the designations of the diseases gathered under organ systems. As all the disease are in one volume then this probably would be unnecessary.

The Clinic Manual has endured as an essential reference text for English language Chinese Medicine practitioners. I consider it one of the vital texts for students and practitioners. Those who own the first 3 volumes may ask if they should buy the 2nd edition. If you don’t use the Handbook very much then probably the new edition won’t do much to change your mind. For those who use it a lot or have only one volume then they will only be pleased with the new information. As for myself I can now have one book at home while keeping the others at the office.